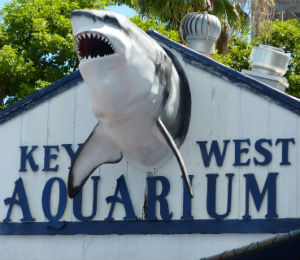 The Key West Aquarium is the only public aquarium in Key West, and features educational programs, and hands on learning the whole family can enjoy. The aquarium is located at the end of Duval Street in the Mallory Square area, and is close to other attractions, so it can be an easy stop and addition to your Key West adventures.

The Key West Aquarium features alligators, atlantic shores, jellyfish exhibits. The alligators are all North American Alligator breeds, and most of them came from an alligator farm in Homestead, Florida. The aquarium has alligators on display to educate the public about this beautiful predator and how important it is in the Florida ecosystem. The American Alligators can live up to 35-50 years in the wild, but the aquarium’s alligators are the ages between 1-3 years old. The Atlantic Shores exhibit was originally a parking lot that was next door, but then was made into a saltwater exhibit to show the Atlantic ecosystem, and even has a living mangrove ecosystem, which is a hard one to replicate. In the tank, there are game fish, sharks, sea turtles, and a wide variety of tropical fish that you can see in the waters of Key West. The Jellyfish exhibit is of the magnificent Moon Jellyfish, found off of the coast in many regions. These beautiful creatures do cast a painful sting, but are not poisonous. They do not have a brain, lungs, heart, head, lungs, gills, eyes or ears, and don’t think. Watch as the move with the water and currents and see them eat zooplankton up close.

Other exhibits the Key West Aquarium has on display are the Shark Feeding Tank, the Touch Tank, and the Stingray Bay. All of these exhibits are interactive and are educational with hosts to help, so the animals do not get overwhelmed either. The shark feeding display allows visitors to watch a guide feed the nurse sharks, and then will allow the public to feel the tail of the sharks after they have eaten. The Touch Tank allows guests to walk up and get personal some of the sea creatures. Some of the animals in this exhibit are conchs, sea stars, sea urchins, serpent sea stars, sea cucumbers, giant hermit crabs, and horseshoe crabs. The Stingray Bay is a great way to get to know the cow nose rays, who are native to the Atlantic Ocean. The Key West Aquarium encourages guests to feed the stingrays, as well as petting and playing with them. The rays have all been de-barbed so there is no reason to be alarmed or worried while doing this.

The aquarium was originally a dream thought up of Dr. Van Deusen, most known for being the director of Philadelphia’s Fairmount Park Aquarium. During the Great Depression, the Works Progress Administration Program decided Key West would be a great place for tourist, and began construction of the aquarium in 1933. This created tons of jobs for the Key West locals, and helped reel Key West out of the depression. The aquarium is the first it’s kind with an open air concept, and was completed in 1935, with an admission of 15 cents for adults and 5 cents per child.