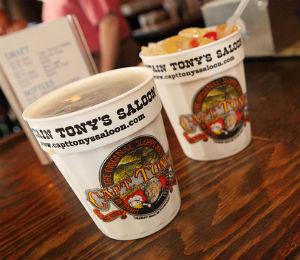 One of the fun things to do in Key West is to visit some of the city's historical bars, and Captain Tony's Saloon should certainly be on the top of most lists. The bar, located at 428 Greene Street, has been a famous Key West landmark since 1851. In fact, Captain Tony's Saloon has been visited by many celebrities over the years, including Jimmy Buffet, Tennessee Williams, Shel Silverstein and Truman Capote. The bar is actually the original location of the popular Sloppy Joe's bar that was often visited by Ernest Hemingway in the 1930s.

The building containing the saloon has an interesting history as it was an ice house doubling as the city morgue when it was built in 1852. In the 1890s, the building was home to a wireless telegraph station before it eventually became a cigar factory in 1912. In later years, the building housed everything from a bordello to gambling halls until it was purchased by a local named Josie Russel in the 1930s. Russel opened his bar and called it Sloppy Joe's Bar, which operated at the Greene Street location until 1938. During that year, Russel moved the bar to Duval Street in protest of a one dollar per week rent hike by his landlord.

The bar on Greene Street went through several changes until it was finally purchased by Tony Tarracino in 1958 and named Captain Tony's Saloon. Tarracino was a charter boat captain, shrimper and gunrunner before his tenure as the proprietor of the saloon. Over the years, he became a very well known personality and was active in Key West politics. Tarracino even ran for Mayor of Key West for four times before winning office in 1989, where he served from 1989 to 1991. During his tenure as mayor, Tarracino was instrumental in preserving the famous Key West sunset celebrations. Although Tarracino sold the bar in 1989, he could be found there often until his death in 2008. The current owners have preserved the name of Captain Tony's Saloon in memory of Tarracino.

As with many of the bars in the city, Captain Tony's Saloon is home to several wild events throughout the year which have become some of the most popular things to do in Key West. The wildest time of year is certainly during Fantasy Fest, a street party that is held annually on the last week of October throughout the city. During this time, Captain Tony's Saloon has some crazy events that range from a Pirate's Party where patrons come dressed in Pirate and Wench clothing, to a Rubber Ball where patrons are invited to wear leather, latex, lace, or practically nothing at all! In addition, the saloon celebrates Captain Tony's birthday each year on August 10th when local family and friends gather to reminisce about the days when he walked the floors of the saloon.