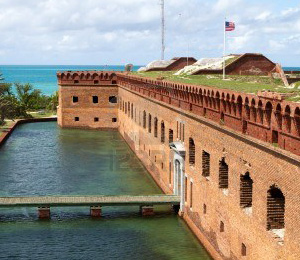 Just 67 miles west of Key West, the seven tiny sand and coral islands that make up the Dry Tortugas are just seven miles in total length. So tiny and so close to the water line are they that much of the archipelago that makes up the Dry Tortugas National Park is under water (of the park’s 100 square miles, just 93 acres are above water.)

Dry Tortugas National Park offers visitors the chance to visit some of the healthiest coral reefs still extant in North America. Three of the eastern keys are pretty much just spits of white coral sand. A lighthouse on the 49-acre Loggerhead Key still keeps mariners safe, as it’s done since 1858!

The island chain gets its name from the Spanish explorer Juan Ponce de León, who dropped anchor here in 1513. The waters at that time literally teemed with all kinds of turtles (hawksbill, leatherback, loggerhead, and green turtles) and so called the islands las tortugas (“the turtles”).

More than 200 ships have wrecked on or near the islands since the 1600s and the islands received their name “dry” because nautical charts of the time warned that the islands didn’t have fresh water (hence they were “dry”).

The U.S. Army in 1846 started building a 1,500-man fort on Garden Key, known as Fort Jefferson. The fort was still unfinished by 1874, when the army closed the fort due to yellow fever and hurricane damage. It was a naval coaling station in 1898 but abandoned again in 1907. President Franklin Roosevelt designated the fort a national monument in 1935.

The only way to get to the Dry Tortugas is by boat or seaplane. The trip from Key West takes about three hours via the Yankee Freedom.

Once you’ve arrived you can enjoy a self-guided tour of Fort Jefferson on Garden Key, including a walk along its seawall, rich with sea life. You also can swim and snorkel, and if you’re adventurous, make that swim or snorkel expedition to the nearby Bush Key (via a narrow channel) so that you can enjoy a true “desert island” experience (check to make sure Bush Key is open for visitors). Those who don’t want to swim or snorkel can walk across a newly-developed land bridge.