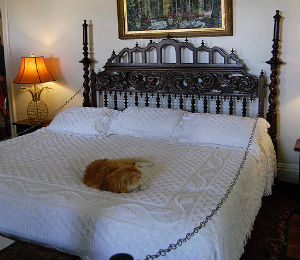 The Hemingway House is a popular option for places to see in Key West, especially among literary lovers. The house holds a romantic sentiment for the life of the adored author, Ernest Hemingway, and history buffs will surely appreciate getting to see how the man lived and how great of sense of humor he had.

The house was Hemingway’s home from 1931 to 1939, but had the title of the home in his name until the day he died. Originally built in 1851, the home was built by Asa Tift, a well-known Marine architect and salvage wrecker. He and his wife of two sons moved to the house 1851, but tragedy struck, as he lost his sons and wife to Yellow fever in 1852 and 1854. Tift lived in the home until he died in 1889. He did a tremendous job of designing the home, as it has been standing after years of hurricanes and storms, and is still going strong. The limestone that is used for the house and the foundation was all excavated on the property, and he purposely chose the highest elevation, knowing it would allow him plenty of room to take the stone from the grounds. Electricity was added in 1899, but indoor plumbing was not added until 1944.

When Ernest and his then wife, Pauline, were visiting Key West for the first time in 1928, the abandoned and boarded up Tift home caught their eye. Pauline’s uncle bought the house as a present for the couple for $8,000. Hemingway would go on to write some of his best work in the home, including “The Snows of Kilimanjaro” and “To Have And Have Not”.

Ernest, Pauline, and their two sons lived at the estate from 1931-1940, that is until, Hemingway moved to Cuba in 1940. Pauline resided in the house from 1940-1951, and raised the two boys there until she died in 1951. The house was left vacant from 1951-1961, except for the caretaker, Toby, who remained on the premises. Hemingway treated the home as hotel when he would layover on his trips back and forth between Cuba and Ketchum, Idaho. After Hemingway’s death in 1961, the sons agreed to sell the home.

The home sold at a silent auction for $80,000 to the local Bernice Dixon, owner of the Beachcomber Jewelry Story. She lived at the residence until 1964, and then moved to the guest house (the bookstore today) to open up the main quarters (only the home) as a museum and memorial to Ernest Hemingway. Bernice eventually moved to a new home in 1968, and turned the guest quarters into the bookstore, where it still stands today. After Bernice died in the late 80’s, the property was left to the family and they still run the museum today.

Today, the residence remain the largest home in Key West, and has about 40-50 “Hemingway” cats on the premises. These cats have become a large appeal of the tour, and are all descendants of the original cats owned by Hemingway. The cats are most notable for having the physical feature of being polydactyl, meaning they have extras toes on their feet, making it look like it has opposable thumbs. These cats are very well looked after, and have routine check ups with the museum’s veterinarian.