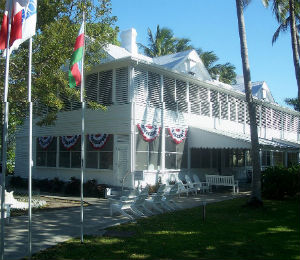 President Harry S. Truman, the 33rd President of the United States, succeeded Franklin D. Roosevelt, after a sharp downturn in health and passed on in 1945. Truman immediately went to work, and took his role as the President very seriously. After Truman’s first 19 months in office and working relentlessly, he went to the his doctor for a perpetual cold that didn’t want to seem to go away. Truman’s doctor diagnosed him with being physically exhausted and prescribed him to take a tropical vacation.

Truman started using the former naval officer residence in 1946, in November. After the first time visiting Key West, he was immediately charmed by the town, locals, and the climate. He even declared Key West to be his second favorite place on Earth, the first being his hometown, Independence, Missouri. He used it as his winter house, and second White House. He spent vacations there working during tumultuous times with war, and nuclear weapons being introduced. Truman invited important figures from all over to have discussions about important topics such as the Marshall Plan. He made huge decisions, and signed historical legislations in the Little White House, including Truman’s fifth Civil Rights Executive Order, a requirement that all federal contractors to hire minorities. Truman had an advantage in communications having had improvements in technology of communications, and was able to run the government from Key West.