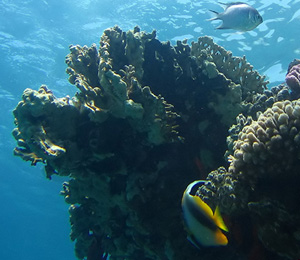 As diverse as the coral reef system is, an important fact to note is how all of the reef’s species need one another to survive and pretty much live in peace.

A coral reef is actually a living organism, made of up of millions upon millions of tiny, live polyps. These polyps secrete a skeleton of limestone and in each and every polyp there’s a microscopic algae known as zooanthellae. This teeny algae conducts photosynthesis.

The polyp and the algae have a symbiotic relationship, in which both live together and both benefit from the other.

The Florida Key’s coral reefs are, in fact, the only living reefs in the entire continental U.S. More than two million people visit the reefs each year by fishing, boating, snorkeling, diving, etc. And, while the reefs look tough (that limestone doesn’t look soft, after all), reefs actually are extremely fragile and excessively sensitive to the environment around them.

In fact, just the merest and softest of touches can harm them, even kill the coral polyps. Anyone swimming, scuba diving or snorkeling among the reefs should make every effort to avoid touching – even just a bit – the reef. Coral grows just 1/8 inch a year, so even the merest of impact can result in massive damage.

Visiting Key West’s coral reef system should be on just about every U.S. citizen’s bucket list. If you haven’t scheduled a snorkeling or diving trip before, there’s no better time than now to see this underwater paradise!