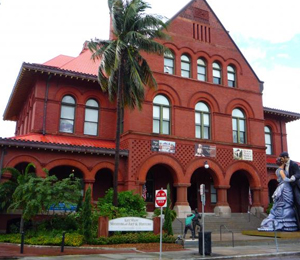 The earliest known residents of this marvelous island were the Calusa, a group of Native Americans who were affiliated with the Caloosahatchee people who lived throughout the Keys and other areas of South Florida. Europeans first sailed past the Keys In 1513 when the Spanish explorer, Ponce de Leon, charted the coastline. This adventurer, best known for his attempts to find the legendary Fountain of Youth, set foot on Key West in 1521.

In the Sixteen-hundreds, the Spanish took control of Key West (then known as Cayo Hueso or Bone Key). The island gained this moniker because of the scattered remains of fallen Native American warriors found along the seashore by the Spanish when they first arrived. Eventually, the Calusa departed from the Keys to settle in what is now Cuba.

Eventually, after the English controlled the island, the word "Hueso" became Anglicized into the word "West" which also happened to be fitting considering Key West's location in the island chain. Cayo Hueso subsequently became known as Key West. Commercial fishing and salvaging became the predominant businesses on the island when the English chased the natives and Spanish to Cuba in the middle of the Eighteenth Century. Spain took advantage of England's colonial struggles in the New World, and retook the Keys in the wake of the American Revolution in 1815. Even after Florida became part of the U.S.A., Key West remained separate as private property divided into four parcels owned by businessmen. Key West's strategic location along the trade route into the Gulf of Mexico was too important to the United States government, who established a naval base on the island. A customs office was also set up to deal with commerce as well as the large influx of immigrants entering the nation through Key West. Captain David Porter was sent to the island to help to eliminate the rampant piracy in the region, but was also considered a ruthless ruler who declared martial law, ignoring the property rights of locals.

After Porter's command (some would call it a "reign"), Key West residents profited from the misfortunes of merchant ships that were unfortunate enough to break up on the extensive reef system offshore. Salvaging the cargo from these wrecked vessels became a booming industry, transforming Key West into one of the wealthiest towns in the United States. Commercial harvesting of the plentiful aquatic life offshore, including turtles, sponges, and fish, also flourished. Until large salt deposits were discovered on the mainland in the late Nineteenth Century, Key West was the main source of salt for the United States. After alcohol prohibition was enacted in the Nineteen Twenties, the smuggling of liquor from Cuba began America's love affair with rum.

In modern times, the nefarious past of bloody battles, piracy, shipwrecking, and smuggling has given way to tourism. The vibrant culture, welcoming locals, and breathtaking natural setting have made Key West a popular tourist destination.