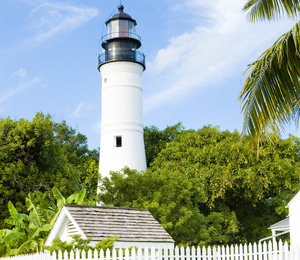 This museum lets you get all close and personal with Key West’s first lighthouse (the current lighthouse is not the original; more on this in a moment). You can walk up the 88 steps to the top of the light tower. You can explore the belongings and writings of keepers and their families.

This lighthouse is owned by Monroe County, which leases it to the museum’s operator, the Key West Arts and Historical society. The lighthouse museum is open every day but Christmas from 9:30 a.m. to 4:30 p.m. and is located at 938 Whitehead Street. Admission is $10 for adults and $5 for children ages 6 and up (children under age 6 are free).

The lighthouse opened on this location in 1825 and its first keeper, Michael Mabrity, died in 1832. His widow, Barbara, took over as keeper, a position she held for 32 years.

Barbara even survived the Great Havana Hurricane of 1846, which completely destroyed the lighthouse (it was reported that only sand covered the spot where the lighthouse once stood), killing 14 people who had sought refuge in its tower (including seven members of Barbara’s immediate family).

Barbara left the lighthouse at age 82 only because she was fired: Key West remained under Union control throughout the Civil War and Barbara spoke out against the Union at that time and so was fired.

The current lighthouse was built in 1849. Its original tower was just 66 feet tall, but was raised over the years to its current 100 feet above sea level. The Coast Guard decommissioned the lighthouse in 1969.

Another lighthouse, also destroyed by the Great Havana Hurricane, was located at Sand Key Light. The land around this lighthouse was pretty much washed out to sea due to the hurricane. Another lighthouse, built atop a screw-pile foundation, was completed there in 1853. (Interesting historical note: this lighthouse was designed by George Meade, who would go on to serve with distinction as a famous general in the Union army, especially known for defeating Confederate General Robert E. Lee at Gettysburg.)Another hurricane in 1856 washed away the island surrounding this lighthouse and while sand has come and gone over the years (enough to also build another keeper’s cottage, which was demolished in 1996), the light tower now stands by itself, surrounded by water. The Sand Key Light is not open to the public.