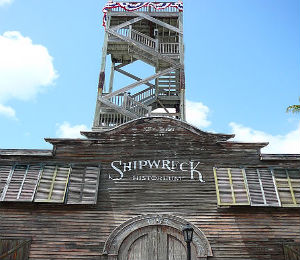 The Key West Shipwreck Museum is one of the most notable buildings in Key West, and would be hard to miss. The building is a large, old-looking, and made of wood that looks like it was salvaged from a bunch of shipwrecks. A part of the Key West Shipwreck museum is the very tall Lookout Tower, where guests get to walk up to the very top and look out over the city of Key West, Mallory Square, and the ocean to find any wreckage.

Tour groups for the Key West Shipwreck Museum will step back into Key West history, and get to know who Asa Tift is very well, as guest will be joining “him” and his crew as he tells the story of how this industry came about. Asa Tift was the master wrecker of Key West of the 1800s, and if his name sounds familiar, it might be because he was the original owner of Ernest Hemingway’s home, and developed a lot Key West’s prosperity through the years of his residency.

The salvaging of wreckage sights became a very profitable business back in the 1800s, mostly because sailing was still heavily used, especially in Florida. It was said at one point that over 100 ships would pass Key West every day, and about one ship would wreck somewhere on the reef per week. This left wreckers to go and salvage anything they could, and then sold it at auction to the locals to make money. This business helped save lives, as well as helped locals have an income. The wreckers would climb the 65-foot tower and watch for any wreckage, day and night. If any were found, they would alert the others by crying, “Wreck Ashore”. The first man to the wreck would be called “wrecking master” and would be controlling that wreckage operation, and would get the larger part of the profit.

At the Key West Shipwreck Museum, guests get the chance to see the treasure that was recovered from one of Key West’s richest shipwreck in history, the Isaac Allerton. The Isaac Allerton spent her years as a merchant ship, sailing mostly throughout the Caribbean, the Gulf of Mexico, and North Atlantic. It unfortunately got caught in a hurricane and sank about 15 off the shores of Key West. Guest also get the incredible chance of a lifetime to hold real-life salvaged treasure, and lift a genuine silver bar that is dated from 1646.