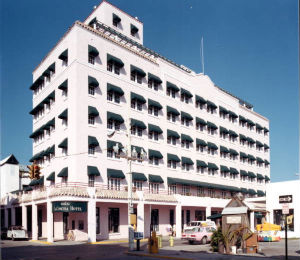 The La Concha Hotel is a historical hotel located on Duval Street that has been a unique part of Key West history since its opening in 1926. At seven floors, the hotel was and still is the tallest building in downtown Key West. When designer and developer Carl E. Aubuchon opened the hotel, it was the first of its kind in the city. The La Concha Hotel featured beautiful décor, marble floors, private bathrooms and an elevator, as well as fantastic views of the ocean. Over the years, this landmark hotel has been visited by many famous guests, including Harry Truman and Ernest Hemingway. In addition, Tennessee Williams actually lived in a top floor suite of the hotel for a year while writing his play 'A Streetcar Named Desire'. Even if not staying at the hotel, the La Concha Hotel is well worth visiting and is one of the top things to do in Key West.

The La Concha Hotel has gone through several ownership changes through the years. Four years after the stock market crash in 1929, Key West suffered a major economic decline. As a result, the hotel was sold in 1930 and renamed the Key West Colonial Hotel. It remained open for decades, but began to fall into disrepair and occupancy rates began to drop. By the 1970s, the only areas of the hotel that remained open were the rooftop bar and the diner located downstairs. It was not until 1986 when the La Concha would finally recover after Holiday Inn purchased the property. Holiday Inn spent millions of dollars in restoring the hotel and getting the rooms back open to the public. Later, Crowne Plaza Hotels purchased the hotel from Holiday Inn and currently operates the property. The most recent renovation was completed in 2012 when Crowne Plaza updated the rooms and added a Starbucks and Jack's Seafood Restaurant.

As with many of the historic buildings in Key West, the La Concha Hotel has a few ghost stories associated with the property. One of the most popular stories regards a man who was cleaning up the rooftop bar on New Year's Eve in 1982. He backed through the open doors of a freight elevator while pulling a cart of dirty dishes, not realizing that the elevator had not arrived on the floor. Some guests claim that they have seen his ghost on the fifth floor and heard his screams through the elevator shaft.

The Crowne Plaza Key West La Concha is the current official name of the La Concha Hotel, and it offers accommodations featuring tropical Colonial architecture. Modern amenities at the hotel include 42 inch flat screen televisions, mini-refrigerators, coffee makers, CD players and in-room safes. The rooms also feature several elegant touches, such as granite countertops, marble showers and dark wood plantation furnishings. Despite the modern appearance of the La Concha, a visit to the hotel it is one of the best things to do in Key West to discover the island's unique history.