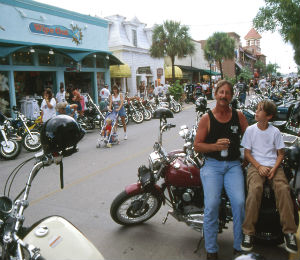 Anyone who enjoys riding a motorcycle, playing poker, and benefiting charities all at the same time should really join in the Key West Annual Phil Peterson Poker Run. For over 40 years, this motorcycle event started with just 46 riders, and is now the biggest riding event for motorist party in South Florida today.

Over 10,000 riders start in Miami, Florida and ride down to Key West on US 1, and one of the most scenic routes with turquoise blue waters surrounding the roads, and ride over the famous Seven Mile Bridge to get to Mile 0. Riders have five stops along the way to draw five cards, and whoever is dealt the best hand is the lucky winner. If the rider is in the top 10 hands, they will get the chance to play a round of Texas Hold ‘Em at Cowboy Bill’s on Duval Street. The winner takes all and will walk away with a brand new Harley-Davidson or $6,000 in cash!

The City of Key West block off most of Duval Street, for the hundreds of bikes to be lined up, and for motorcycle parking. It’s quite the sight to see! Usually this is about an eight block stretch to make enough room for the huge bike show, that is held in front of Sloppy Joe’s Durty Harry’s, and Rick’s bar. This mini-parade has a carnival-like atmosphere that welcomes and attracts all locals, tourists, and bikers with music, food, and ice-cold beer.

The Annual Phil Peterson Poker Run has raised over hundreds of thousands of dollars for charities like the Diabetes Research Foundation, and the Key West Sunrise Rotary Club, and could be the most fun a charity event could ever get. As well as benefiting different charities, and raising awareness, the motorcyclists also generate a stimulation in the local economy in Key West, the Florida Keys, and Miami. They have brought millions of dollars during late September, which would be otherwise a very dead season for Key West businesses.

The Peterson’s Harley-Davidson of South Florida is known in Miami for being generous in serving the community, by regularly motorcycle events including bike nights, weekend trips, and the most well-known, the Key West Poker Run. Normally, the Poker Run is toward the end of September, and be sure to buy tickets to the Biker Brunch held on Sunday. Island hopping is greatly encouraged among cyclist, as there is probably not enough to accommodate for all 10,000- 15,000 riders on the island of Key West.

Many riders stay the week before or after, and enjoy Key West snorkeling, or a Key West dinner cruise. For more information on signing up to ride for this event, visit the Peterson’s Harley website.