Ripleys Believe It or Not! Odditorium

Ripleys Believe It or Not! Odditorium 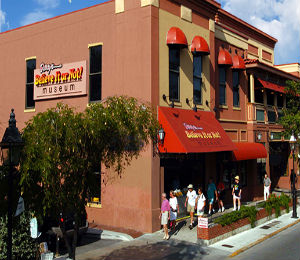 Ripley’s Believe It or Not! was founded by the talented Robert Ripley, whose sole passion was dealing in the odd and the bizarre. Ripley started out with a series of cartoons for the New York Globe in 1918, that were sports related until he ventured out and started adding items unrelated to sports. He changed the name of the cartoon feature to Believe It or Not in October 1919. After the New York Globe folded in 1923, Ripley moved to the New York Evening Post, and hired researchers that would work in the New York Public Library for 10 hour days for six days a week, looking for interesting and bizarre facts of the world. One notable researcher Ripley hired would be Norbert Pearlroth, who would research relentlessly for Ripley for 52 years.

This cartoon that he made of weird facts soon snowballed into books, radio show specials, and t.v. specials, and of course, the museums. Ripley displayed his first collection to the public in 1933 at the Chicago World’s Fair. It attracted over two million people, and was dubbed the name “Ripley’s Odditorium”. In a promotional scheme, they provided beds for the people who “fainted” daily. This, of course, attracted the curious minds, and Ripley decided to take the show on the road to any major fairs all over the United States. A year after Ripley died (1949), the first permanent Ripley’s Believe It or Not! Odditorium was opened in Saint Augustine, Florida, and Ripley unfortunately never lived to see his legacy live on.

As of 2010, there were a total of 32 Ripley’s Believe It or Not! Odditorium all over the globe. All of them carry different oddities, and are unique in their displays. The main Ripley’s in Orlando, Florida was built to look as if it is sinking into the ground. There are four museums in Florida alone, including Panama City Beach, Orlando, Saint Augustine, and Key West.

The Key West Ripley’s Believe It or Not! Odditorium is located on the popular, and famous Duval Street. The Odditorium is a great educational museum to engage kids, both big and small. The Odditorium is filled with plenty of photo opportunities, and is wheelchair accessible, so everyone can enjoy this oddities. Ripley’s is also available to host class trips, birthday parties, and is suitable for small children, as it is a family-friendly attraction with many interactions and chances for everyone to learn something.

To book a tour for a Key West vacation, try taking a tour of our wonderful Ripley’s Museum as one of the things to do in Key West.