Secrets of the Key West Graveyard

Secrets of the Key West Graveyard 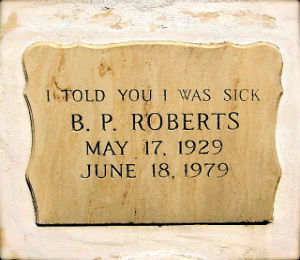 The Key West Graveyard is a large cemetery located in the center of Old Town that is believed to contain the bodies of almost 100,000 people, nearly triple the amount of residents who currently live in the city. The graveyard was established in its current location in 1847 after a hurricane in 1846 destroyed the original location on Whitehead Point. Although many bodies were washed away, the remaining graves were moved to the new location. Therefore, visitors to the Key West Graveyard will find that some of the grave markers are actually older than the graveyard itself! The majority of the newer graves have been established in vaults above the ground due to both the high water table and the limited space that is left beneath the surface.

The Key West Graveyard contains many fascinating plots, such as a memorial to those who were killed in the USS Maine. There are separate areas in the cemetery for Jews, Catholics and Cuban refugees, and angel sculptures mark the graves of children. Therefore, a walk through the Key West Graveyard is one of the unique things to do in Key West. The cemetery has multiple entrance gates and is open to the public for free. The recommended entrance is located at the corner of Passover Lane and Angela Street, where visitors can pick up a complimentary brochure that contains a self guided walking tour. Visitors who would like more detailed information about the graveyard can join one of the Historic Florida Keys Foundation walking tours, which run twice a week for a fee. As there is very little shade in the graveyard, visitors should wear sunscreen and plan to visit early or late in the day.

There are many interesting secrets behind the graves at the Key West Graveyard, including the story about a man named Manual Cabezi. In 1921, Cabezi was humiliated by Ku Klux Klan members for having a mixed race girlfriend. Cabezi was so enraged by this that he approached one of the members on Duval Street and shot him to death. Cabezi was immediately thrown in jail for the crime, but the next day he was taken from the jail by several men and subsequently lynched. In addition, the Key West Graveyard has a number of unusual grave markers that are well worth seeking out, such as those that humorously note that "I'm just resting my eyes" and "I told you I was sick". The cemetery also contains the grave of Joe Russell, the famous owner of Sloppy Joe's, as well as Wilhelmina Harvey, the first woman mayor of Key West. A stop at the Key West Graveyard is one of the many interesting things to do in Key West, and visitors will enjoy reading these unusual and historical grave markers.