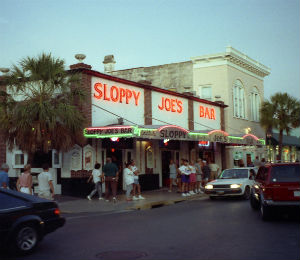 Sloppy Joe's on Duval Street is one of Key West's iconic bars, and a visit to this historical establishment is one of the fun things to do in Key West. The bar dates back to December 5, 1933, which was the exact day on which Prohibition was revoked. Joe Russell, who was a charter boat captain and entrepreneur, had ignored the Prohibition and operated several bars that sold alcohol illegally. Ernest Hemingway, who lived in Key West at that time, even used to visit one of Russell's establishments to purchase some illegal bottles of Scotch.

At the end of Prohibition, Russell began operating a legitimate saloon called the Blind Pig. Later, a dance floor was added to the facility and the bar was renamed the Silver Slipper. Although the saloon had a reputation for unruly patrons, Hemingway was still a fan of Russell's establishment. He motivated Russell to change the name of the bar to Sloppy Joe's, which he based on a nearby club called Jose Garcia Rio Havana. Due to the floor that was constantly wet at Jose Garcia Rio Havana, patrons of the club called it a sloppy place. Sloppy Joe's operated in its original location on Greene Street until May 5, 1937, when it literally moved overnight to the Duval Street location. The bar never actually shut down as patrons simply carried their drinks down the street from the old location to the new one. The move was prompted by a $1.00 per week rent increase that Russell refused to pay.

Although Josie Russell passed away in 1941 from a heart attack, Sloppy Joe's has essentially remained the same over the years. The bar is open every day of the year, operating from 9 AM to 4 AM daily except for Sundays when the hours are from noon to 4 AM. In addition to the bar, Sloppy Joe's offers food and a retail store with a variety of t-shirts that are nearly as popular as the bar itself. Inside the bar area, there is dancing and live music each night of the week.

Sloppy Joe's hosts several major annual events throughout the year, including a Biker Bash, Toga Party, Put-In-Bay Music Festival, and the Dropping of the Conch Shell on New Year's Eve. One of the most popular events is the Papa Look-Alike contest, which is a Hemingway look-alike contest to celebrate the birthday of Ernest Hemingway. The contest takes place over three days in July, where three rounds decide the winner. In addition, Spring Break and the Fantasy Fest street party take crazy to a new level in Key West as many patrons spill into Sloppy Joe's and many of the other bars in town. Taking part in the revelry is part of the Key West experience and as a result, a visit to Sloppy Joe's is one of the top things to do in Key West.