The Founding of Key West

The Founding of Key West 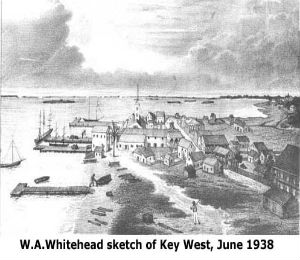 The southernmost tip of the United States is called Key West. It has been owned by three different countries in its lifetime: England, Spain and the United States. It is favored of the Caribbean for its sponge, of Cuba for its cigars and of the United States for its salt. Key West dodges hurricanes, is a popular port for cruise lines, and is the favorite vacation spot for people around the world. Key West attractions include homes in which famous people have lived and created, from Ernest Hemingway and Tennessee Williams to Presidents Truman, Eisenhower and Roosevelt, to actress Kelly McGillis and singer Jimmy Buffett. The founding of Key West and its subsequent history is peppered with notable persons, too.

Not much is written about Key West’s original peoples, except to say they were Calusa Indians. As explorers pushed further and further into the interior, the natives were pushed back until there was nowhere else to go. The natives were slaughtered and left littering the beach. Key West in Spanish is Cayo Hueso, which means Bone Key or Bone Island. It was named so by passing Spanish explorers who saw the bones on the beach. About this time, Key West began to be added to the maps of explorers.

England controlled the islands for twenty years after the massacre on the beach. Following the American Revolution, however, Key West was returned to Spain. This was when written records began to detail the actual owners of the island. In 1815, the Spanish governor of Florida awarded Key West to the staunchly loyal Juan Pablo Salas. Salas did not improve or settle the island. Six years later Salas decided to sell his property for $2,000 to American businessman John Simonton. This new owner saw the potential of the four square mile island with the deep water harbor. He immediately portioned the island between businessmen Greene, Whitehead and Fleming, keeping the harbor portion for himself.

Simonton interested the Navy in the harbor, who sent Lt. Matthew Perry to sniff out the possibilities. Lt. Perry claimed the port for the U. S. Navy, following which the port was also named a port of entry. This meant that foreign cargo could be offloaded in Key West, and more importantly, salvage cargo could be offloaded there instead of in St. Augustine. Lt. Perry also knew of the pirates who used Key West as a port. In 1823, Commodore David Porter was appointed to rid the seas of the pirates. Key West attractions include some of their lairs. He accomplished this with alacrity, but established martial law on the island, which didn’t sit well with the inhabitants.

One of the charming expressions in Key West regards immigrants from early days. Those fleeing the Bahamas settled in Key West and were called Conchs (conks). The term stuck to any who settled in Key West from “outside”. Today it is applied to those living on the island less than seven years.