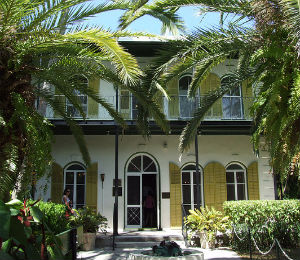 The Hemingway House is located on Whitehead Street across from the Key West Lighthouse and was the home of Ernest Hemingway from 1931 to 1939. During this time, Hemingway completed a significant portion of his writing work. The house was designated as a U.S. National Historic Landmark in 1968 and now operates as a museum open to the public. A visit to the Ernest Hemingway Home and Museum is considered one the most interesting things to do in Key West.

Ernest Hemingway came to Key West in 1928 and fell in love with the town. He eventually made a decision with his wife Pauline to establish a permanent residence there. In 1931, Pauline's uncle purchased a house on Whitehead Street that was in extremely poor condition. However, Hemingway transformed the house into a beautiful residence after a huge amount of renovation work. Once completed, the house became the first one in town to feature running water in the upstairs bathroom and indoor plumbing. Later, the Hemmingways added a swimming pool to the property which was the first one in the city. The installation of the swimming pool was so expensive that Hemmingway actually pressed a penny into the concrete during the construction process, claiming that he had given his last cent to the project. This penny can still be seen today in the concrete near the pool when visiting the museum.

The Ernest Hemingway Home and Museum contains much of the original furniture that the Hemingways used when they lived in the house. Some of the pieces are those which Pauline purchased when she lived in Paris and had shipped to Key West. As a testament to Ernest's love for art, one wall of the living room has a St. Paul's Church painting that was completed by a local artist named Eugene Otto. Other items of interest in the home include multiple antiques and artifacts that were collected from the Hemingway's travels throughout Africa and Europe. The Ernest Hemingway Home and Museum is even home to some living history as several descendants of Ernest Hemingway's cats still roam the property.

The Hemingway House and Museum is a wonderful place to visit and is one of the best things to do in Key West. The site is open daily from 9 AM to 5 PM, and admission charges are currently $13.00 for an adult and $6.00 for a child. Children five and under are admitted to the museum for free. All admission rates include a 30 minute tour of the home and no advance reservations are necessary. Among other parts of the house, the tour includes a visit to Ernest Hemingway's writing studio and the grounds that are maintained as a beautiful garden.