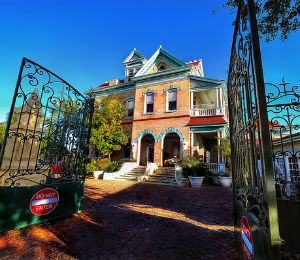 The Southernmost House is a historic inn situated by the Atlantic Ocean on the southern end of Duval Street. The house was built in 1896 as a private home for Dr. Jeptha Vining Harris, a prominent Civil War surgeon, where he lived with his wife Florida. The construction cost of the home at that time was $250,000 and it was built from Indian block, a large molded concrete block. The Indian block was used with wooden and steel trusses so that the entire structure could be resistant to hurricanes and other storms. Although Mr. and Mrs. Harris enjoyed visitors, they also appreciated their privacy. Therefore, the house was originally constructed with only one bedroom while a guesthouse was built next to it for visitors. The Southernmost House is one of the most photographed houses in the nation, and visiting the home is one of the top things to do in Key West.

In the early 1940s, the Southernmost House became a popular venue for both tourists and locals when it was purchased by a Spanish family and changed into a Cuban nightclub called Café Cayo Hueso. During these years, the club was visited by celebrities such as Charles Lindbergh, Truman Capote, Ernest Hemingway and Louis Armstrong. After the home's successful run as a nightclub, it became a residential property again in 1954 when it was purchased by the Ramos family. They completed a total refurbishment of the Southernmost House which resulted in the beautiful and charming home that can be seen today. The home was so attractive that celebrities and politicians from all over the world wanted to stay there when they visited Key West. As a matter of fact, the Ramos family hosted many U.S. Presidents over the years, including Jimmy Carter, John F. Kennedy, Harry S. Truman, Dwight D. Eisenhower and Richard Nixon. A helicopter pad was even built on the property to resolve security issues when Spain's King Juan Carlos came to the home for a visit.

The Southernmost House remained a residence until 1996 when it was converted and renovated into an 18 room bed and breakfast at the cost of $3 million. It is considered one of the most desirable places to stay in Key West, with each guest accommodation having its own unique charm. Rooms range from courtyard view rooms to ocean view suites, and each room features a flat screen television, refrigerator, coffee maker and air conditioning. Guests of the Southernmost House enjoy a complimentary island style continental breakfast each morning, which includes fresh pastries from a local bakery, fruit platters, cheeses and more. The Southernmost House is just a short walk from downtown attractions, restaurants and bars, which makes it very convenient to put on a list of things to do in Key West.