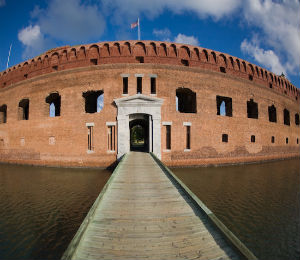 Fort Jefferson was made after the U.S. purchased Florida from Spain in 1824, and shortly after, was inspected by U.S. Navy Commodore David Porter. Commodore Porter was looking for the perfect location for a naval station that would help defend against the piracy of the Caribbean, which was becoming a problem back then, but declared the Dry Tortugas unfit for this due to lack of fresh water, and that he thought the islands were not solid enough to hold a fort. After this was declared, the U.S. decided to use the island and build a lighthouse on it instead. In 1829, Commodore John Rodgers visited the Dry Tortugas to observe anchorage. Commodore Rodgers was happy with what he found, and completely disagreed with Commodore Porter’s findings, and the concept of Fort Jefferson began.

Fort Jefferson was started after 17 years of designing and engineering, and construction of the fort officially began in 1846. It took nearly 30 years of construction, but was never completed. The fort was actively used between the 1860’s and the 1930’s by the federal government, and most notably used to hold prisoners during the Civil War. The most notable prisoners the fort held were Dr. Samuel Mudd, Samuel Arnold, Edmund Spangler, and Michael O’Laughlen on the count of conspiracy of with the assassination of President Abraham Lincoln. But since Dr. Mudd was such a huge help during a yellow fever epidemic in the fort in 1867, killing many prisoners, and received praise for his medical help. He was pardoned from President Andrew Johnson was eventually released on good behavior. In 1888, Fort Jefferson’s use for the military began to wear off, and was becoming an expense to maintain. It wasn’t until Franklin D. Roosevelt in 1935 designated the fort as a Fort Jefferson National Monument. In 1992, the Dry Tortugas, which Fort Jefferson is a part of, was declared a National Park.

The islands of the Dry Tortugas, including Fort Jefferson, still do not have any streams or forms of fresh water throughout the islands, hence the name “dry”. This fort has been mentioned and used for different movies, t.v. shows, and literature, including most recently, being noted in Max Brooks novel, World War Z, as the place survivors of the zombie apocalypse would use.

Fort Jefferson is one of the most popular things to do in Key West, so the ferry and plane tours do tend to fill up quickly. We recommend calling as soon as the Key West vacation is booked to see if there is availability.