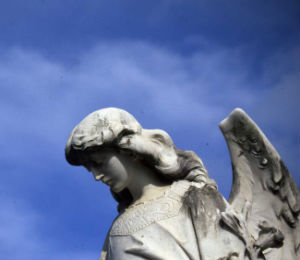 Visitors might think that going to a graveyard to be grim and depressing, but Key West sees it differently. As one of the many things to do in Key West, the locals will actually recommend going to visit to Key West Cemetery if looking for a good laugh, or getting to know the local history of the island. You can see by the headlines on the gravestones that Key West locals have had a good sense of humor for years.

The Key West Cemetery is located on 19 acres of land at the bottom of Solares Hill in the middle of five major streets: Angela Street, Frances Street, Olivia Street, Windsor Loane, and Passover Lane. It sits in the northern area of the “Old Town”. Over 100,000 people have been buried here, even though the island’s population is only at 30,000 residents.

In 1846, historic records show that after a horrific hurricane that came through October, and the burial grounds were not built to withstand that type of flooding, the hurricane washed the dead bodies from the original cemetery all over Key West. It is even said that once the flooding had receded, bodies were turning up all over the island including being lodged in trees of the forest. The Key West Cemetery we know today was established a year after the hurricane had happened in 1847, after the City bought the plot of land in the center of Old Town for $400. As years went on, the cemetery made separate sections, for different religions on the island, such as the Catholic Cemetery, and the Jewish Cemetery are within the whole cemetery.

Over the years, there have been interesting monuments made, and mausoleums made for those who have passed on. Enjoy the put into each of the gravesites, and read the headlines that have visitor’s asking, “I wonder what the story behind that is.” And thanks to Key West ghost tours, and cemetery walking tours, it’s easy to learn what that story was.

Known as the Key West hypochondriac marked her grave site with the saying “I Told You I Was Sick.”

Little is known about Gladys, but her grave statue may be the most remarkable of the marks, with a Victorian style angel statue.

This family used an Egyptian Revival style, and is associated with eternity.

Most well known for his bar on Duval Street, and fishing guide to Ernest Hemingway, he lays in this graveyard of his beloved Key West.

There are so many more to see when visiting the cemetery in Key West. Come enjoy a Key West vacation with us today, and see all the fun to be had.