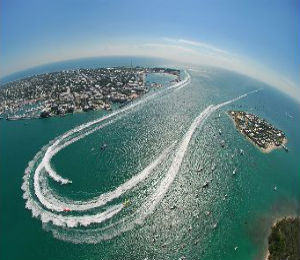 With calm, and glassy waters surrounding the island, Key West is one the most perfect places to play on a super speed boat as well as enjoy a Key West vacation. Every year in November, super speed boats zip in and out and around the island in a matter of minutes. These boats are high adrenaline and high energy, even for those just watching from ashore. These super boats race each other in this world recognized event at top and dangerous speeds, giving nail-biting, sitting on the edge of the seat entertainment.

For over three decades, the Annual Key West Super Boat World Championships has been having this heart stopping race. Competitors come from all over the world to compete against each for the World Super Boat Trophy. It’s one of the seven national competitions that happen offshore. The other locations include New York, Deerfield Beach (Florida), Miami, and Nassau (Bahamas). These “speed freak” captains have to be extremely focused, and have to follow the rules and guidelines given in order to keep themselves and other competitors’ safe.

Over this three day event, races are held continuously, and no points are carried over from any other previous competitions held in the World Championships. The championships have become so popular, that Comcast and AT&T U-Verse are having livestreams of it on the Internet to watch, so no one has to miss any of the action. It has increased in viewership online in recent years due to popularity around the world, but not being able to attend.

These speed boats can reach up to 170 miles per hour, and can be very dangerous. The captains have been professionally trained, and will not be reaching the max speed these boats are capable of. There have been many records broken over the last few decades, mostly breaking time and speed records.

And the best part about this competition is it’s free to watch from the shorelines, and cheer on your favorite team, and when you’re done, you can still enjoy your vacation with the many things to do in Key West!