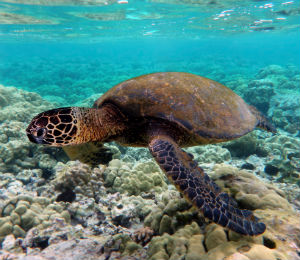 Some of the most popular Key West activities are snorkeling, diving and glass bottom boat tours. Each of these unique activities gives visitors the chance to experience some of the amazing reef fish in the area. One of the most common living species found in the waters surrounding Key West are sea turtles. These amazing creatures are one of the oldest life forms on Earth, with the seven remaining species dating back over 100 million years!

At first glance, the sea turtle looks just like any other turtle found either in a zoo or in the wild. However, unlike other turtles, the sea turtle cannot withdraw their head or legs into their shell. The sea turtle's shell, technically known as a carapace, has been naturally designed for efficient swimming in the ocean. Their color may vary between black, green and yellow, dependent upon the actual species. The seven species of sea turtle are the Loggerhead, Green turtle, Hawksbill, Leatherback, Kemp's ridley, Olive ridley and the Flatback, otherwise known as the Caretta caretta, Chelonia mydas, Eretmochelys imbricata, Dermochelys coriacea, Lepidochelys kempii, Lepidochelys olivacea and Natator depressa, respectively. The Loggerhead is the most frequently seen, with thousands of the species found nesting in the southeastern USA each year.

The sea turtle will eat a variety of common sea items including algae, crabs, jellyfish, mollusks, seaweed, shrimp and sponges. However, each species of sea turtle has a unique and specific diet. As an example, the loggerheads eat primarily prey with hard shells such as crustaceans, fish and lobster because they have strong jaws that are designed for crushing. Meanwhile, green turtles prefer to eat sea grasses, leatherbacks feed primarily on jellyfish, and the hawksbills slice through anemones, coral and sea sponges with their powerful beak. One interesting thing to note about all sea turtles is that although their jaws have a ragged edge, they lack any teeth.

The sea turtle's habitats, which include their feeding, nesting and migratory areas, are beaches, coral reefs, near shore, lagoons and the open ocean. Sea turtles tend to be particular about the beaches where they nest, but little is known about why they select any specific beach. For example, the loggerheads in Florida have thousands of nests along specific beaches when other similar beaches to the north have virtually no nests at all. The one thing that is known about the beach selection is that the female sea turtles will return to the identical beach location every time that they are prepared to nest. Coral reefs are an important ecosystem to sea turtles, and near shore hard bottom reefs supply a habitat for sea turtles at an average depth of less than 15 feet. Lagoons are a popular feeding area for the young sea turtles since they mostly feed on large seagrass beds found in the lagoon. Finally, the open ocean provides an ideal habitat for sea turtles and other species of fish to feed, breed and grow to maturity.