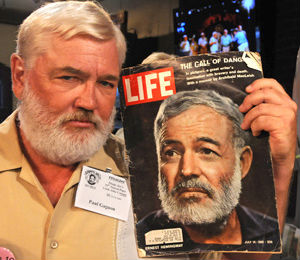 Every year Key West and Sloppy Joe’s team up together in search of the best “Papa” Ernest Hemingway look-a-like in the world. Key West’s love and admiration for the Pulitzer Prize winning author, Hemingway has only grown stronger throughout the years, decades after Hemingway used the island as a home and retreat. Once a year, Key West is home to a festival called “Hemingway Days”, which Hemingway fans gather to celebrate one of the most notable authors in the world.

The Hemingway Look-Alike Contest has been a popular event of Key West for years, and about 125 white-bearded men will assemble to compete against each other. The competition is held at Sloppy Joe’s every year, the bar that Hemingway frequented himself, being his favorite bar in Key West. These men come from around the U.S. and from other countries in the hopes of winning the prominent trophy of being crown Hemingway look-alike of the year. And every year, these contestants compete for the title and are judge by past Hemingway Look-Alike winners, who will choose the next winner. Imagine going to Sloppy Joe’s to enjoy a drink, and seeing nothing but a sea of white-bearded jolly and chubby older men all wearing the same thing.

These contestants devote their time to sounding, moving, and acting like Hemingway. They try to have the same zest for life attitude, and take it very seriously. The crowd of Hemingway Look-Alikes participate in other Hemingway Days activities, such as the “Running of the Bulls”, where the men push life size mock bulls on wheels, and is a spoof of the Running of the Bulls in Pamplona. And there is also a birthday party involved! Every year the events have a pre-birthday party to celebrate Hemingway’s birthday a little early, since his actual birthday is on July 21. There’s even a cake!

Anyone lucky enough to have purposely or mistakenly book their Key West vacation during the week of Hemingway Days, this would be the number one event to attend! And the best part is, it’s free to watch. So grab a drink at the bar, take a seat, and become a judge of your own, and pick the most deserving Hemingway look-alike of the year.

If you or someone you know could pass as Hemingway and would like to enter the contest and be involved in the event, check out Sloppy Joe’s look-alike entry form for any and all guidelines. This is just one of thousands of things to do in Key West!