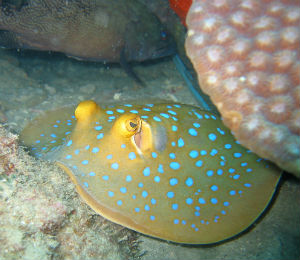 While spending time in Key West, one of the most exciting activities is exploring the beautiful waters surrounding the island. While participating in a dive, snorkeling trip or glass bottom boat tour during your Key West vacation, you are sure to come across an amazing array of reef fish and marine life. One of the unique reef fish that are often spotted in Key West waters are sting rays.

The stingray has a flat body consisting of pectoral fins that are attached to their head. These fins have the appearance of wings as the stingray gently glides through the water. They also have a long tail that trails behind their body, most which contain venomous stingers. However, these stingers are only used as a defense mechanism if the stingray feels cornered or threatened. The stingray's eyes are situated on their dorsal side, while their nostrils, mouth and gills are located on the soft underside of their body. Therefore, most experts feel that their eyes do not play a significant role in hunting. The stingray's color normally reflects the shading of the ocean's floor so that they can be effectively camouflaged from predators such as sharks and larger stingrays. The stingray gets its name from electrical sensors around their mouth that is technically known as ampullae of Lorenzini. These organs allow the stingray to be aware of their potential prey's natural electric charges.

Stingrays are carnivores that eat small fish and other sea creatures that they find along the bottom of the ocean. Their diet normally consists of clams, mollusks, shrimp and snails. The majority of stingrays have strong jaws that allow them to crack open their prey's hard shells. Many stingrays also eat worms as part of their diet. The stingrays blend in extremely well with sand, so they are usually undetected by their prey. Therefore, the stingray simply has to wait for something to swim by and attack. When the prey is nearby, the stingray will immediately crush the prey using their mouth. Although a stingray usually doesn't spend any time hunting fish, they will eat a fish if it happens to swim past them. Stingrays do not have powerful eyesight, so they rely primarily on a sense of smell to detect their prey.

Stingrays live in warm bodies of water throughout the world, and their overall preference is for the shallow waters in coastal regions. They can also be found in extremely deep levels of the ocean. However, the specific habitat preference depends upon the species of stingray, which are classified into eight families. For example, the Dasyatis thetidis species prefers the parts of the ocean with a warmer temperature, while the Plesiobatis daviesi species much prefer the deep ocean. In addition, some whiptail stingrays and river stingrays are confined to fresh water habitats. Some of the largest habitats for stingrays are found off the Australian coast and in the warm waters of the Caribbean.

A guide for starting your own travel blog.