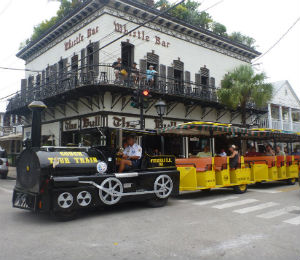 Even though this isn't exactly a "place" to see in Key West, visitors from all over the world that come to enjoy a Key West vacation usually quickly get familiar with the world famous Conch Tour Train. For most people, this is usually their first stop when in Key West. This bright and yellow tram designed to look like a train takes visitors on an adventure and will point out all the important sites, and odd tales of Key West.

This special tour was designed to give visitors the freedom of hoping on and off the train at specific and designated spots on the tour. So, if a visitor on the train decides that the Key West Aquarium would be nice to visit, they can jump off at the stop that is located in Old Town, go into the aquarium, and hop on another train when they are finished to do the rest of the Conch Tour Train. Some visitors even use it as a fun downtown taxi, while getting to learn all about the local sites and history, at the same time as having the choice to jump off at tone of the three stops and grab a cocktail at the nearest bar.

The Conch Tour Train just recently celebrated their 50th Anniversary, and has become a staple attraction in Key West. Founded by Bill and Olive Kroll in 1957, it took the couple a couple of years in order to start the Conch Tour Train in Key West. Bill took a job in the Navy in Key West sometime after 1941, after they had to leave their motel business in Fort Pierce due to gas rationing and tourism on the decline after the war. Bill started operating a charter boat called “Cay Sal” in 1945 with Lefty Reagan, until Bill took on another great project in 1946. Bill bid on the aquarium’s lease and gave it a makeover to turn into another tourist attraction. Bill and his wife Olive ran the aquarium for 10 years, until giving it up, packing up in a trailer and traveling for a year. When the couple returned, they had bigger and better ideas, thus the birth of the Conch Tour Train started.

Bill and Olive started the tour with just one train, with Bill as the driver and Olive sold tickets from a sidewalk. They added two more trains for the tour by 1960, because business was booming. Business was growing, so Olive’s cousin Mary Ann, decided to move down from Michigan and help the family business as a General Manager. The tour company built 10 trains for tours, until it was sold to a company named Wometco of Miami, FL in 1972. Mary Ann, Bill and Olive made such a great experience that it has been hard for any other tour in Key West to top. Almost 50 years later, and Mary Ann says she still gets stopped by people who tell her they rode on a Conch Tour Train ride with her almost 50 years ago.

Come to Key West and ride the charming Conch Tour Train, and then experience the many things to do in Key West!